Despite its long and profuse tradition, even today the art of Africa remains mostly misunderstood and overlooked outside of the continent. Many people find it hard to relate to African representations of social status, beauty, spirituality, and ethics, so distinct from what we are used to seeing in the Western world. Today, we’ll try to bring traditional African art a bit closer to you, by explaining some of its key elements and ideas.

Let’s start by mentioning that African art is a very broad and versatile term that’s usually used to describe art made in the sub-Saharan region. Although traditional African art and aesthetics greatly vary from one country to another, there are elements that are shared across the continent. 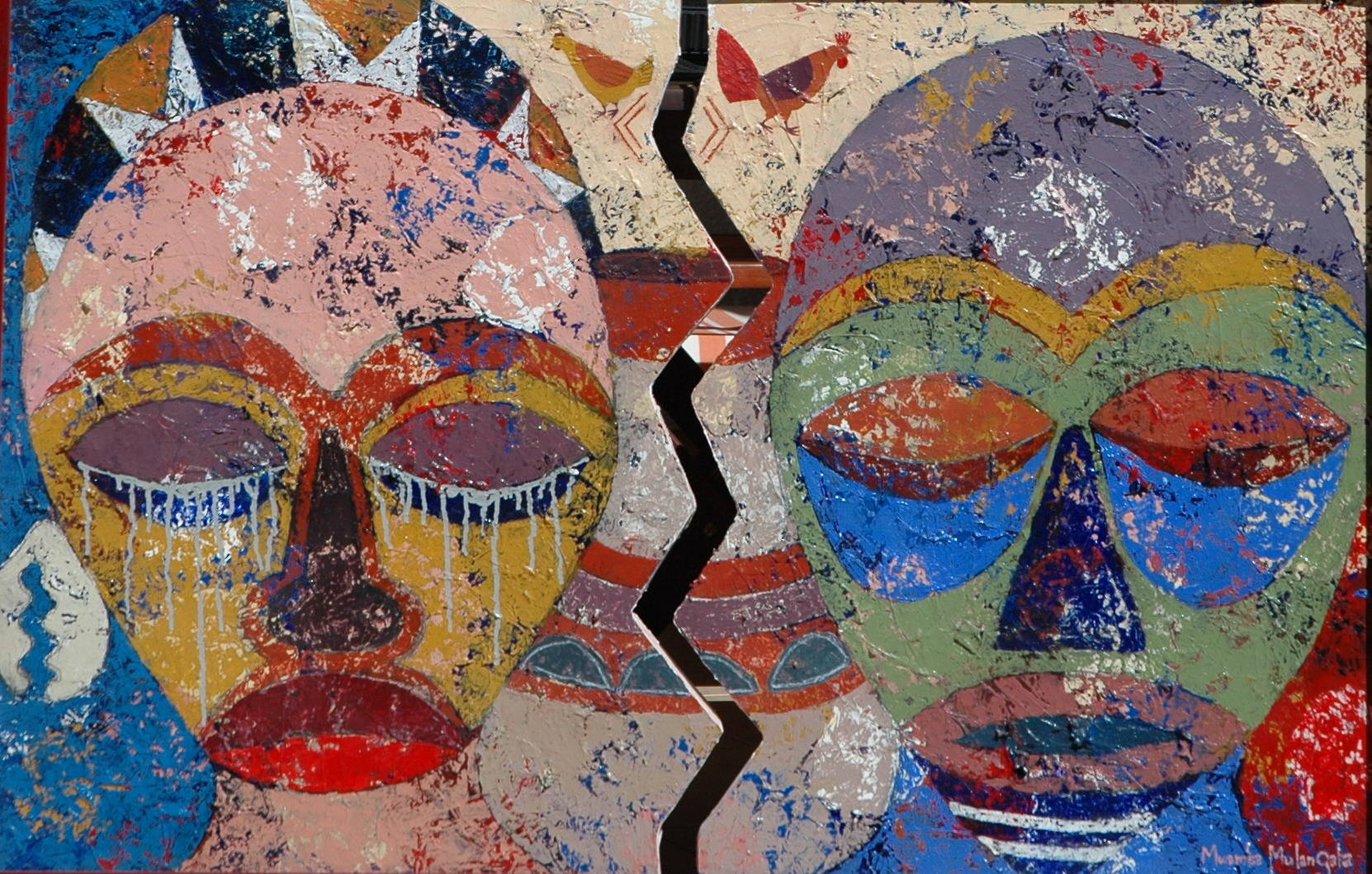 Effigy of Divorce by Mwamba Mulangala

Visual abstraction is one of the most prominent characteristics of African art. Most traditional African artworks are abstract. The African proclivity towards abstraction has its roots in the need of the artist to express an idea, rather than simply portray a subject. Instead of depicting animals and humans realistically, African artists distort, reshape, and creatively interpret their figures.

Since most traditional African artworks have ethical or religious subtract, these abstract animal and human figures, often present various ideas such as spirits, mythical gods, their powers, moral values, superstitions, etc. Being deeply metaphorical, African art emanates deeper meanings and lessons that go far beyond the ideas of beauty and pure aesthetical appeal. For example, oversized heads on human figures are a common feature in African Art. The symbolism is obvious. A large head signifies an intelligent and wise person, which is why it is often used in depictions of kings and tribal leaders.

African abstraction doesn’t derivate from the requirements of the medium or lack of the artist’s skills. Quite the opposite, it is an artist conscious choice used to convey the message. This is particularly visible in the representations of female beauty where instead of naturalistic figurative representations, African artists usually choose to highlight the concept of beauty dominant in their culture (by portraying, for example, small mouths, braided hair or, ringed neck). When it comes to full body representation of women, the ideas of large breasts or swollen belly are common as they highlight the fertility and the female role as nurturers.

Speaking of heads, have you ever noticed how they all look alike? Instead of individualizing their portraits, artists resort to what’s known as generic physiognomy. More often than not, when an artist learns to make a head, (eye, mouth, chin, etc.) he or she would continue to make the same head type for every art piece. This one generic head type is then continuously reproduced, rather than personalizing every face. Apart from the obvious reasons (the fact that is easier to make the same face over and over again), it is believed that African artists avoided making realistic faces, out of fear that someone can use the figures as voodoo dolls to control, depicted people, and cause them harm. 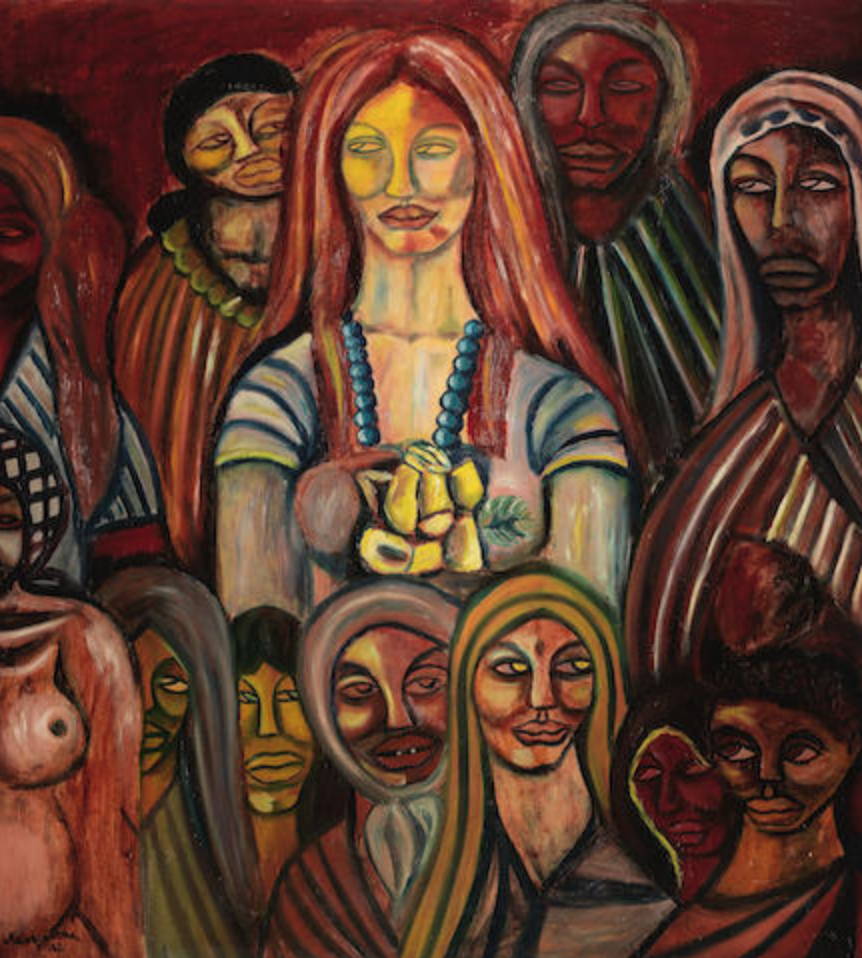 Bride and Councillors by Malangatana Valente Ngwenya via Bonhams

The ideal of self-composure is also prominent in African art. It is believed that those who are composed behave rationally and proudly. The ideal human representation is one of serenity, untainted by emotions. That’s why human subjects in African paintings and sculptures usually have a restrained expression lacking smiles or signs of frowning.

Another way to evoke a high position within society is by depicting the individual frontally, without lateral movement. When looking at African figures, you will notice that the spine and head are aligned and the position of the head is turned to the front and not tilted or turned. Frontal portrayal symbolizes the formal status of a figure. If a head of a figure is turned or tilted, it usually means that the person is a child or a person of lower status (for example, a member of an entourage).

Favoring the ideal of stillness, African artists rarely portray people in action. Since any movement implies work, African artists prefer to showcase a still figure therefore implying the qualities of elevated being. Stillness, frontality, and expressionlessness are all elements that embody the ideals of dignity and permanence.

Human beings are constantly showcased in their idealized youthful form. In African art, humans are never painted as old or ill, as the two are considered the signs of evil. That’s why humans are always portrayed as young and strong, at the peak of their existence. Youth symbolizes fertility, strength, productivity, and the ability to work. When portraying an older person the artist will use other symbols, for example, a beard to imply old age, but still leave the face fresh and without wrinkles. Sometimes even children who died in infancy are portrayed in their adult years, thus giving them the body of a strong, young person they never got a chance to become. 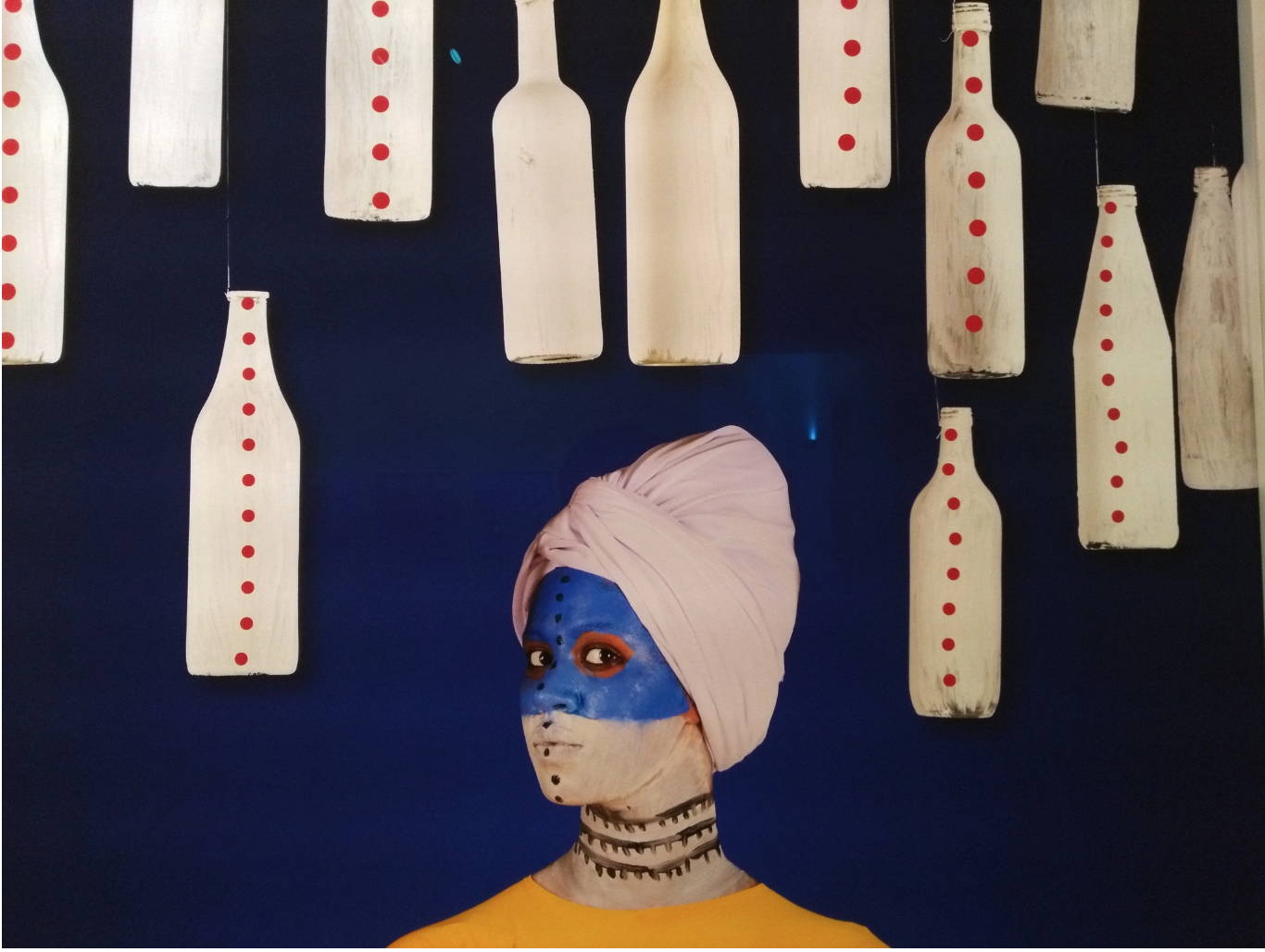 Youthfulness is closely connected to another element often emphasized in African art - luminosity. The smooth glossy surfaces, seen in many African sculptures, signify luminous healthy skin. Since in African culture, beauty and health imply good character, luminosity also represents a good, morally decent human being. In this interpretation, the person’s good character results in a unique glow as the person illuminates from within. And the opposite, of course, apply. If a figure has a rough surface, it is intentionally made that way, to imply ugliness and moral flaws.

In African art, the size of portrayed persons often signifies their social standing. That means that when depicting a group of people, the one that’s the biggest and the tallest, is the most powerful and has the highest rank in the social hierarchy, while the smallest figure of the bunch is the lowest on the social scale. The propensity to scale human figures based on their social status rather than on their natural height, is also called a hieratic scale or a hierarchical scale. Babies and children are an exception to the rule, and their size signifies their age and immaturity, as they are yet to obtain a social status.

Get to Know the Soul of Africa

These are some of the key elements of African art and visual culture. Keep in mind, however, that African art is highly versatile and that you can always find exceptions to the rules. To understand African art means to understand the heart and the soul of the continent. Dwelling into a rich African heritage will take years and pages to describe, but hopefully, this blog post will be a great, starting point. And by bringing African artworks into your home or into your collection, you’ll create a relationship with a culture so different and exotic, yet so enchanting and relatable, to art lovers all over the globe.